There are many types of dogs out there in the world full breed dogs, mixed dogs, fat dogs, short dogs this list can go on and on. Most households have a dog or two romping around the yard and house trying to play tag and chase the cats up the trees. Doug Holly’s house hold was the same way… Well not exactly. 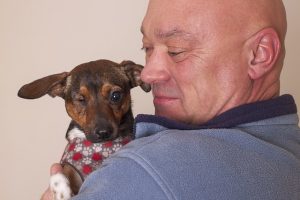 You see, Doug had a problem and couldn’t say no to dogs. Every time he saw a dog on the streets he had to take the pup home. Doug had so many dogs that he was no longer allowed at the local shelters because he always came out with a dog or two. All was fine and dandy in Doug’s home of dogs until one day he scratched one of the dogs behind their ear and mumbled a soft “Good boy.” Suddenly the house almost started shaking because all the dogs started wagging their tails all at once and running for Doug to get remarks of approval as well.

The pups felt Doug’s frustration over the whole issue and scattered around the house tucking their tails in between their legs and heads down they all waddled away except for one pup in particular. Doug had a grand idea. He decided to tie a piece of bacon to a string and tied it from the ceiling as to not tease the pup he made it just out of the dog’s reach but still accessible. Doug had a seat and watched the puppy grow more and more smart in it’s attempts to grab the bacon, before long the puppy had it and jumped off the TV stand claiming his prize. With a smile Doug grabbed more bacon and a different puppy repeating the process.

Now Doug had entertainment and all his dogs that he adored, howeverDoug now thought twice before getting a new dog.